Everything on ACA  Compliance

What is the ACA?

The Accessible Canada Act (ACA) is a federal law in Canada that requires various industries to comply with accessibility rules. The ACA came into force on 11 July 2019.

It took years of effort from disability activists and other advocacy groups to get the ACA passed. Authorities in Canada conducted months of surveys to determine what legislation would have the best impact on Canadian society. Many people see the ACA as a major milestone in the government’s “Accessible by 2040” program, a country-wide effort to make all facilities in Canada open to disabled people over the next 2 decades.

“With this legislation now in place, we can begin a journey that will lead us to a society that treats all people with the dignity they deserve.” Public Services and Procurement and Accessibility Minister Carla Qualtrough said in a statement after the bill was passed. 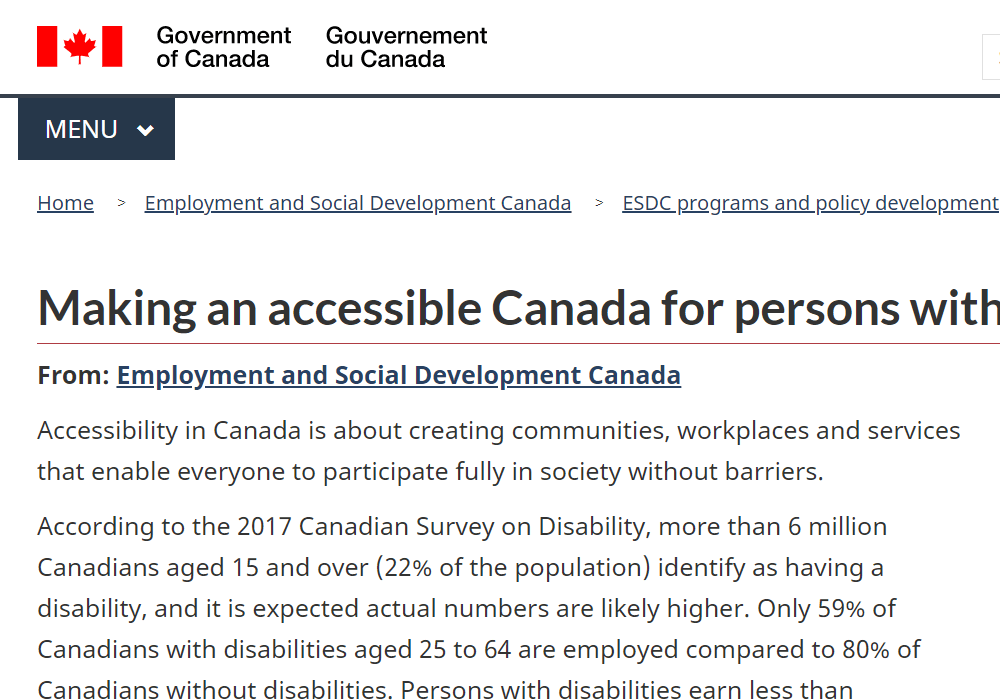 Who Has to Comply with ACA?

Unlike other similar legislation like the Accessibility for Ontarians with Disabilities Act (AODA), the ACA is a federal-level law, applying to nearly all geographic areas of Canada.

In terms of industries and businesses, the ACA affects only areas that fall under federal jurisdiction. That includes 3 types of entities:

The ACA states unequivocally that the new law applies to “technological” platforms as well as any medium based on “information or communications.” That means that websites connected to any of the above industries are also affected by the ACA.

What Happens if I Don’t Comply with ACA?

To make sure that businesses follow the ACA, it includes serious consequences for non-compliance and created new structures and positions to oversee compliance. The

ACA is enforced by:

The Canadian Accessibility Standards Development Organization (CASDO), led by a board of directors comprised of a majority of people with disabilities, will develop accessibility standards in collaboration with the disability community and industry

If you violate the ACA, you could be fined up to $250,000 for each infraction, depending on whether your violation is “minor,” “serious,” or “very serious.”

However, the exact process of investigating and charging violations hasn’t yet been established. Existing regulators and complaints bodies, such as the Canadian Transportation Agency, the Canadian Radio-television, and Telecommunications Commission, the Canadian Human Rights Commission, and the Federal Public Sector Labour Relations and Employment Board, are all required to set up a mechanism for referring accessibility-related complaints.

How can you know if a website is ACA compliant?

It’s crucial to run an audit on any website that may be inaccessible to people with disabilities within your region. An ACA Compliance Checker like accessScan can provide a fast and free report within seconds, and presents you with a detailed overview of barriers that exist on a website. Once you receive this report, getting started becomes more doable and how to achieve compliance is also clarified.

The ACA lays out strong powers for authorities to prosecute violators.

A specific process for investigating and charging for violations has not yet been formulated. The new legislation is built on a whole-of-government approach to accessibility. Existing regulators and complaints bodies—such as the Canadian Transportation Agency, the Canadian Radio-television, and Telecommunications Commission, the Canadian Human Rights Commission, and the Federal Public Sector Labour Relations and Employment Board—are required to collaborate to put in place a mechanism for the efficient and expeditious referral of accessibility-related complaints.

Similarly, on the issue of standards, the ACA contains barely any specific regulations. Any rules that are listed are extremely generic such as “removing barriers” to disabled people.

The next phase policymakers planned for from the outset will include the development of standards and regulations by the CASDO. But in the meantime, there are very few guidelines on accessibility requirements.

What do I have to do to comply with the ACA?

The ACA contains barely any specific regulations for accessibility standards. The only rules listed are very generic, like “removing barriers” to people with disabilities. That’s because the ACA was planned to allow the CASDO to develop the next phase of standards and regulations, but for the moment, there are very few guidelines on accessibility requirements.

Despite this, the law requires companies to regularly submit reports on their organization’s accessibility standards.

Accessibility Plans. These are reports published “in consultation with people with disabilities”  describing company strategies for improving accessibility and meeting their legal duties. Companies have to publicly publish these plans and let the Government of Canada know when and where they are published, and update them every three years.

Progress Reports. These are documents detailing the company's implementation of its Accessibility Plan. A timeframe for these reports still hasn’t been set. It is likely that the deadlines will not be codified until after accessibility standards for the ACA are drafted.

Despite the lack of defined accessibility standards, there are already other Canadian accessibility laws, like the AODA, which are based on the Web Content Accessibility Guidelines, WCAG 2.0, so it’s likely that the ACA’s standards will follow their lead.

It should be noted, other laws in Canada such as the Accessibility for Ontarians with Disabilities Act (AODA)--a provincial law that until ACA was the most important accessibility regulation in the country--are based on the Web Content Accessibility Guidelines (WCAG) by the World Wide Web Consortium (W3C). It is very likely that ACA’s standards will also be based on the latest version of WCAG.

The WCAG, which is an evolving set of international web accessibility standards, consists of 4 principles that act as the foundation for the guidelines’ complex requirements. These essential principles are: perceivable, operable, understandable, and robust.  While the WCAG itself is not a set of laws to be enforced, it is, however, referenced within several worldwide legislations for making websites accessible at the mandated level. Those who achieve compliance with the WCAG, achieve compliance with the legislation of their jurisdiction.