Everything on IS 5568  Compliance

The Israel Standard (IS) 5568 is Israel’s standard regarding web accessibility. It was originally set to take effect in 2015, but it was delayed several times until it finally came into force in October 2017. The aim of IS 5568 is to remove barriers against people with disabilities in Israeli society. Various government departments, including the Ministries of Justice and Finance, pushed for years to get legislation like IS 5568. 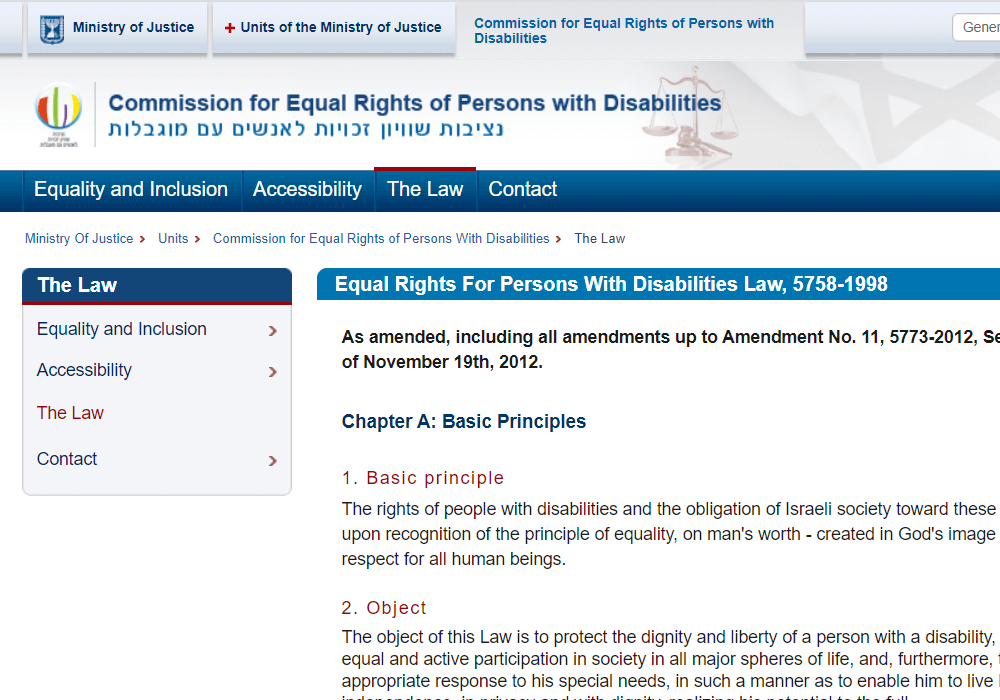 IS 5568 resulted from years of effort in various government departments (including the Ministries of Justice and Finance) to remove barriers for the disabled in Israeli society.

In 1998, the Israeli Parliament passed the Equal Rights For Persons With Disabilities Law (ERPD) which aimed to ensure that Israelis with disabilities could achieve “active participation in society.” This law gave a very broad definition of disability, referring to “a person with a physical, mental or intellectual, including cognitive, impairment, whether permanent or temporary, which substantially limits [...] functioning.”

In August 2000, the Commission for Equal Rights of Persons with Disabilities (CERPD) was set up to enforce the ERPD. It immediately began to assess different accessibility policies that it could use for areas in both private and public sectors.

In 2012, the Israeli government adopted the United Nations Convention on the Rights of Persons with Disabilities, which gave more power to the CERPD. The UN’s convention required member states to open our access to information and communication technology for people with disabilities. Ultimately, this search for accessibility in technology led to the formulation of IS 5568. A committee made up of representatives from Israeli NGOs and government officials met to draft the new standard. This committee decided to base IS 5568 primarily on the Web Content Accessibility Guidelines, WCAG, of the World Wide Web Consortium (W3C). The opening page of IS 5568 states that it is essentially identical to WCAG 2.0.

According to amendments to the ERPD Law, the IS regulations apply not only to public entities but to every service offered to the general public. The ERPD contains an exhaustive list of examples of businesses and utilities which are bound by IS 5568. To simplify the rules, Israel’s Ministry of Justice has published a condensed summary containing the types of industries subject to the Standard. These services include:

The business size makes a difference too. Here’s what you should know:

In Israel, failing to make your website accessible is a civil infraction under the ERPD. A disabled individual is able to file suit against an entity maintaining a website that lacks accessibility standards. Similarly, an organization representing a group of people with disabilities is able to file a class action.

The legal teeth behind IS 5568 are much sharper than those for similar web accessibility laws in other countries, like Section 508 in the US. Under many other laws, if someone does not comply then the court can only force the website owner to implement the necessary changes on their website. But IS 5568 entitles the plaintiff to request statutory damages of up to 50,000 NIS. The plaintiff also doesn’t have to prove that they suffered any loss or damage because of the non-accessible site. All they have to prove is that the site is not compliant.