Everything on ADA  Compliance

What is the ADA?

ADA stands for the Americans with Disabilities Act. It was signed into law by President George Bush in 1990, and it’s America’s most important law regarding accessibility and civil rights for people with disabilities, including web accessibility.

Essentially, the ADA prohibits discrimination against anyone based on ability or disability. It came about after a 2-year campaign to advance civil rights to marginalized groups, including Americans with disabilities. Disability activists and advocates lobbied intensely for laws that would prohibit discrimination, and from 1988 they began to garner cross-partisan support for federal legislation. 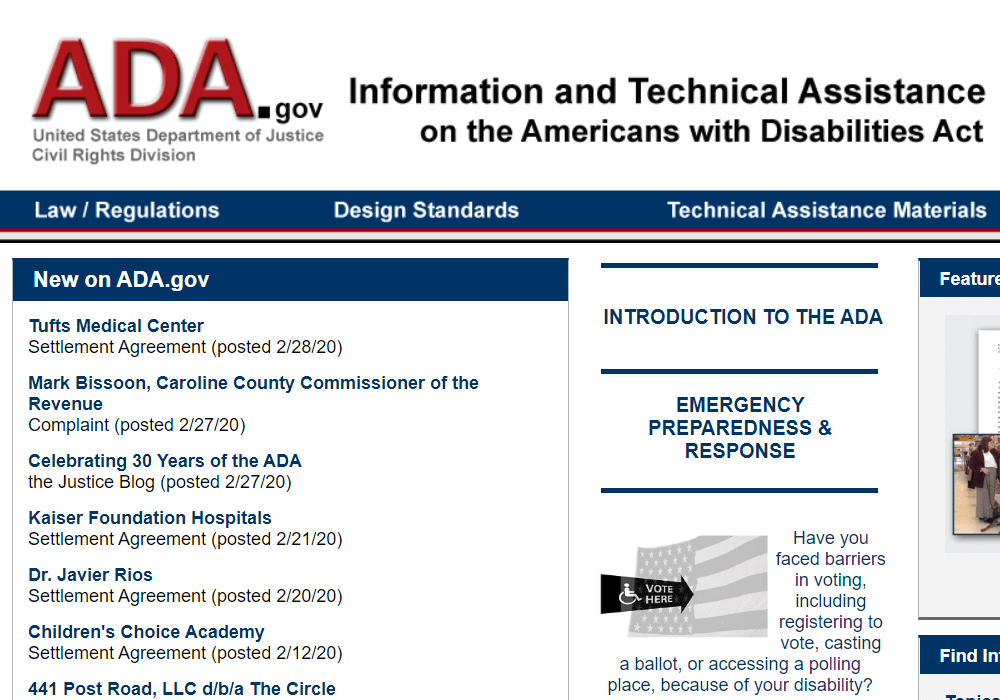 What does the ADA cover?

ADA is a very broad and wide-ranging piece of legislation that covers a lot of different aspects of accessibility for people with disabilities. The part of the ADA that affects the way that businesses serve customers is called “Title III,” so you’ll hear accessibility legislation referred to “ADA Title III”

Required accommodations at places of business for disabled individuals include:

Who counts as “disabled”?

The most important change involved the definition of a disability. The original ADA defined a person with a disability as someone who has a condition that “substantially limits major life activities.” Courts defined this wording in a very conservative way, which meant that a number of ADA lawsuits, like the famous Sutton vs. United Airlines case of 1999, and Toyota vs. Williams in 2002, were dismissed because the plaintiff wasn’t considered to have a disability.

Under the 2018 amendment, “major life activity” was redefined to include daily activities like caring for oneself or performing manual operations. It was also extended to include impairments to major bodily functions like digestive and respiratory functions, and neurological impairments, as legal disabilities.

Who has to be ADA compliant?

There’s a common misbelief that ADA only applies to very large corporations, but that’s a serious mistake. All types and all sizes of businesses have to comply with ADA legislation, for their customers, and for their employees if there are over 15 employees. That means that ADA affects:

Is ADA compliance mandatory for websites?

It was clear from the beginning that ADA affected every kind of business in the physical realm, but it’s less obvious that it covers websites and online spaces. The 1990 bill obviously did not predict today’s huge breadth of internet use. The past decade brought a range of rulings from the U.S. courts, with some insisting that websites do not qualify as a "public place of accommodation."

However, as the internet became more important and websites played a bigger role in the way that consumers interact with businesses, the way that ADA is applied to web accessibility began to change. Since 2017, a clear consensus emerged that ADA also covers the online world. Disability rights activists,legal scholars, and court rulings have agreed that websites, internet portals, and online stores also need to be accessible for people with disabilities.

In September 2018, Assistant Attorney General Stephen Boyd wrote an official letter to members of Congress that said “The Department first articulated its interpretation that the ADA applies to public accommodations' websites over 20 years ago. This interpretation is consistent with the ADA's...requirement that the goods, services, privileges, or activities provided by places of public accommodation be equally accessible to people with disabilities."

Today, U.S. courts apply ADA accessibility requirements to the online domain, which means that websites should comply with ADA rules.

ADA’s relevance to web accessibility isn’t just theoretical. Since 2017, the number of ADA title III-related lawsuits has skyrocketed. In 2017, 816 ADA Title III lawsuits were filed, but in 2018 that number rose to over 2,200 cases. That’s a rise of 180%, and it’s only the tip of the iceberg. It doesn’t reveal the increasing number of ADA legal complaints and lawyers’ demand letters that were filed against businesses with non-accessible websites in the last few years, because they never become part of the public record.

In 2020, 265,000 demand letters were sent. This represents a steep incline in legal actions pursued following the notice of non-accessible websites on the internet. The number of Title lll ADA lawsuits also climbed in 2021, with at least 11,452 federal filings documented. Overall, web accessibility lawsuits have seen a 320% increase over the past eight years.

Why are there so many ADA website compliance lawsuits?

There are a few reasons why ADA web accessibility has become such a hot legal topic in just the last few years.

One element is that commerce has shifted dramatically to the digital sphere. eCommerce boomed, rising from a total market value of $449 billion in 2017 to $517 billion in 2018. By 2021, the market value had increased to $13 trillion. Online retail purchases during 2021 spiked at $870.78 billion, with digital revenue lifting by 50.5% when compared to sales growth in 2019.

What’s more, many of our regular activities have transferred to the internet, like ordering a cab, booking a doctor’s appointment, or checking on bus times. As web interactions become fundamental to our daily lives, web accessibility has become more important.

The last few years also saw a spread in awareness about web accessibility. High-profile lawsuits and the increasing knowledge about ADA title III means that people with disabilities now know that they have legal recourse when they can’t complete activities online. Millennials and Generation Z are also a lot less likely to stay quiet in the face of discrimination and inaccessibility.

At the moment, the legal environment in the US makes it very advantageous for someone with disabilities to sue businesses under ADA Title III. Unlike many other areas of the law, ADA makes it clear that the defendant automatically has to pay the plaintiff’s legal fees, so a disabled user has nothing to lose by filing a lawsuit.

The vast majority of ADA Title III lawsuits find in favor of the plaintiff. Through a series of findings, settlement agreements, and an official letter to lawmakers, the Department of Justice (DOJ) has made it clear that ADA compliance includes web accessibility.

Since it’s almost inevitable that the court would find in favor of the plaintiff, small business owners often feel that they have no choice but to settle out of court. The cost of defending a lawsuit would destroy even a medium-sized business, but the average ADA website lawsuit settlement still comes to $35,000.

The implications are clear: a non-accessible website is a major liability for any company operating on the web today. It’s worth remembering that the market for people with disabilities is also rising. At around $21 billion, it’s worth more than the African-American and the Hispanic markets combined.

In 2019, digital accessibility has become a fundamental principle for all marketers and businesses who understand that users’ needs always come first. If you want to keep your business safe from ADA web accessibility lawsuits, appeal to customers with disabilities, and feel that you are upholding the social fabric, you need an accessibility solution for your website.

Web agencies need to keep ADA title III requirements in mind too. If a client gets sued for having a non-accessible website, that client will turn to the agency that designed it. The client could insist on getting their money back; ruin that agency’s reputation for failing to comply with legislation, or even sue the agency for having created a non-ADA-compliant website.

Hundreds of web agency owners have expressed their fear that their clients would get sued if they don’t provide accessible sites, but that any manual solution would take months to implement and cost thousands of dollars. Web agencies were waiting in trepidation to see if they would get hit with the fallout from an ADA title III lawsuit.

Part of what makes ADA title III compliance so difficult is that the law doesn’t specify what you need to do to make your website accessible. As Assistant Attorney General Boyd wrote to Congress: “Absent the adoption of specific technical requirements for websites through rulemaking, public accommodations have flexibility in how to comply with the ADA’s general requirements of nondiscrimination and effective communication. Accordingly, noncompliance with a voluntary technical standard for website accessibility does not necessarily indicate noncompliance with the ADA.”

Although the DOJ has declined to adopt any official legal standard for the ADA, it has frequently referenced the Web Content Accessibility Guidelines (WCAG) 2.0. Many rulings set WCAG 2.0 Level AA as the goal for website accessibility, even though this isn’t codified into law. At the moment, WCAG 2.1 is the best measure of web accessibility when it comes to federal law, and it’s unlikely that a site that’s WCAG 2.1 Level AA compliant would be sued for lack of accessibility.

How can you know if your website is ADA compliant?

Free auditing tools are available online to check your website’s accessibility and compliance levels with ease. With accessScan, accessiBe’s ADA compliance checker, you’re presented a holistic overview of accessibility errors and what needs to be adjusted in order to comply with WCAG 2.1 Level AA guidelines. The scan operates in just a few seconds, providing you with an almost-immediate answer to whether your website is ADA Title lll compliant or not.