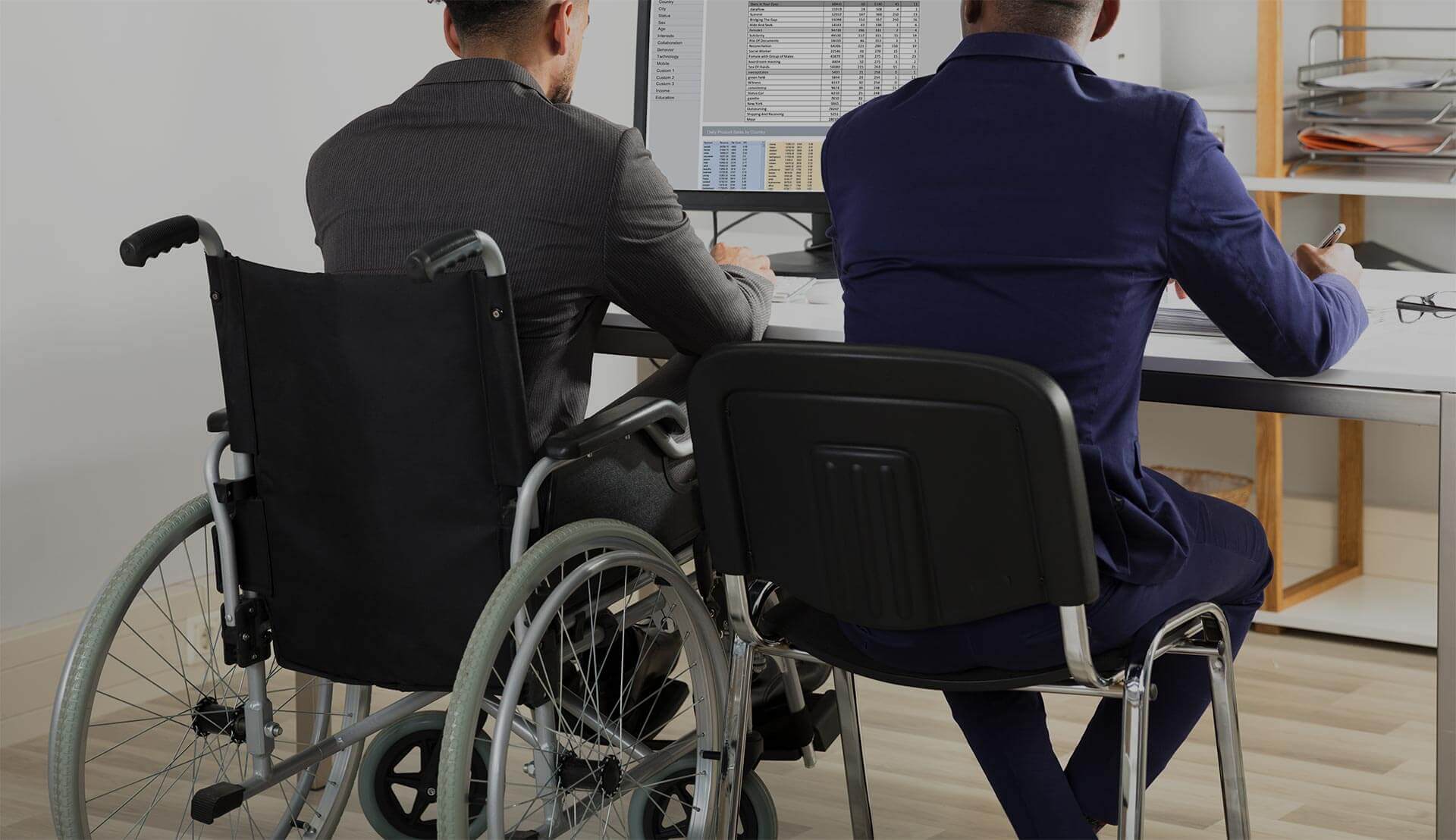 Societies have long been trying to develop assistive tools for people with disabilities, and while there have been many important developments throughout the years, our modern technological boom has brought accessibility to a whole new level.

Scientists and inventors across the globe (many of whom themselves live with a disability) have cranked out some incredible gadgets, opening up whole new worlds for the disabled.

Until recently, it was taken for granted that the ability to use one’s hands was essential for being able to use a digital device. Not anymore.

The EyeMax system was designed for those with little or no motor ability. EyeMAx gives individuals living with conditions such as cerebral palsy, other forms of paralysis, and stroke victims the ability to participate in spoken communication using only their eyes. Using a sophisticated eye-tracking system, users can interact with an on-screen keyboard, allowing them to enter words and phrases on a screen-based device. The user can make a selection with movements as simple as blinking or pausing on the desired section of a page.

The New Hampshire-based DEKA brought the world to the age of science fiction with this one.

DEKA’s Robotic Arm was developed under the ‘Revolutionizing Prosthetics’ program of DARPA, a division of the American Defense Department. The results are amazing — a less-than-eight pound prosthetic arm with such precision and control that it can peel a grape. The device works by translating signals from a patient's muscles into complex motions. The core technology of the robotic arm whereby electromyogram (EMG) electrodes are used to pick up electrical signals from the patient's muscles, has been around for years. But DEKA’s scientists took it to a whole new level. The DEKA Arm gives back amputees or those with certain congenital conditions, the use of a missing limb with extremely high functionally.

The arm, which is also available commercially, delivers a number of incredible capabilities to amputees, including a powered shoulder joint that can reach overhead or behind the back; an elbow strong enough to lift a bag of groceries from floor to tabletop; a wrist with enough range of motion and fine dexterity to hold a glass of water overhead or at waist level without spilling; and a complex hand with four motors that can hold heavy items and delicate ones like an egg without dropping or breaking either.

The iBot was created by Segway inventor Dean Kamen back in 2001. The machine came with some pretty amazing features: it could climb stairs, raise users from sitting level to eye-height, and travel at a steady walking pace in this "standing" configuration.

The iBot Wheelchair has gone through several upgrades over the 18 years since its invention. Current models produced by a variety of manufacturers are able to ride through sand and snow and traverse rocky terrain by actually climbing and over obstacles.

At the cutting edge of today’s accessibility technology is the ReWalk Exoskeleton. ReWalk is a wearable robotic device that provides powered hip and knee motion to enable individuals with disabilities to stand upright, walk, and even climb and descend stairs.

The ReWalk works through the activation of sensors that respond to shifts in the body of the wearer. A forward tilt of the upper body is sensed by the system, which initiates the first step. Repeated body shifting generates a sequence of steps that mimics a functional natural gait of the legs.

In a testament to ReWalk's effectiveness, in December 2015 the United States Department of Veterans Affairs (VA) announced its policy for training and procurement of ReWalk systems for all qualifying veterans.

The technology that powers ReWalk has been applied by its creators to the field of physical rehabilitation as well. ReStore is an electric-powered, lightweight soft exo-suit intended for use in the rehabilitation of individuals with lower limb disabilities. It assists patients in the process of recovery from major injuries or neurological incidents.

Invented by a team of Indian computer engineers in 2013, the Braille phone is a device with a screen comprised of a grid of pins. Whereas other solutions for mobile users with bad eyes have relied solely on voice commands, vibrations, beeps, and squeaks, this breakthrough uses pins that form words and letters for the user to “read” through touch. When the user receives a message, the pins form shapes and characters using the "Shape Memory Alloy" technology. Non-sighted users have access to nearly all features of even the most advanced smartphones, including phone calling, messaging, organizer apps, music, maps, and email.

For the wheelchair-bound, the simple task of driving in a car can be a major ordeal. Typically, for a passenger in a wheelchair, the only solution has been expensive motorized ramps, which aren’t even compatible with most vehicles. The founders of Kenguru set out to create a vehicle that would circumvent this problem.

The Kenguru is an electric car in which drivers can remain in their wheelchairs. It’s a one passenger vehicle driven with motorcycle-style handlebars. Powered completely by electricity, it has an estimated range of 60 miles on an eight-hour charge.

One of the most innovative technologies making a hand-less computer experience possible is Lucy 4, a keyboard operated by a head-mounted laser. The user mounts a battery-operated laser pointer on his or her glasses or headband, then selects keys on the custom stand-up keyboard.

Thanks to its ergonomic design and smart letter layout, the user needs to move his or her head only a couple of centimeters to the left, right, up or down to type any given key. This solved a major problem that was prevalent with similar scanning technologies, namely that users had to move their heads substantially in order to activate the different commands, making operation very tiresome. If a user can handle a mouse or trackball better than the laser lamp, those devices can also be used to operate Lucy. Alternatively, Lucy can be controlled by one or two electronic switches.

The OrCam is one of those wow-devices that seems more like science fiction than reality.

Created by the Jerusalem-based company with the same name, OrCam is a portable device that mounts a smart camera on eyeglass frames. Using artificially-intelligent vision, OrCam recognizes text and items and speaks them to its wearer via a bone-conduction earpiece. The OrCam can assist visually impaired individuals with tasks ranging from reading, identifying objects, and even navigating busy streets. More than the actual technology behind the OrCam, it’s the device's usability that gives it even more of an edge over other vision assisting solutions. The actual camera is relatively small, with a sleek design, barely noticeable and certainly not a nuisance to the wearer. Additionally, the cues given by the OrCam or only audible to the user, which means operating the device in a public area can be done quietly and discreetly.

People with motor, speech, and language have for long had difficulty when it comes to using voice recognition software. Voiceitt changed that by translating unintelligible pronunciation in any language to understandable speech with its innovative voice recognition software. Voiceitt is designed to help individuals with dysarthria, atypical acoustic control, and other congenital or acquired speech disorders. The core mobile application is a hands-free voice recognition program that enables face-to-face, real-time communication with other individuals by playing back more coherent words. In addition, the technology has also been integrated into smart homes, Assistive and Augmentative Communications devices, and smart speakers as a voice recognition app to enable voice commands.

As far as vision assistive technologies, the EyeMusic might be the most creative. EyeMusic is a device that translates information usually conveyed through sight into sound. EyeMusic is a Sensory Substitution Device (SSD) that uses one form of sense perception to replace another. It uses bone-conduction headphones to play musical notes that create a ‘mental image’ of the visual scene in front of the user. What’s important to understand is that EyeMusic does not give auditory language cues like other assistive devices. Rather the technology uses a series of notes and sounds with subtle changes to relay images that are re-created in the brain of blind individuals, giving them a cognitive experience akin to the actual site. EyeMusic was groundbreaking in the field of SSD for the visually impaired as it allows for the communication of extremely fine details of the material world, including color, shape, and even three-dimensional depth and span.

Find out more about how accessiBe is changing the way people with disabilities access the digital sphere.